Los Angeles: Detectives from the Los Angeles Police Department’s West Los Angeles Division have arrested a Burglary/Vandalism suspect and are seeking to identify any additional victims.

On Thursday, August 22, 2022 around 7:25 p.m., the suspect was observed on CCTV walking up to a coffee shop located in the 2400 block of Federal Avenue while holding a large rock in his right hand.

For unknown reasons, the suspect stopped in front of the locations walk-up window and threw a large rock through the window, reached in and attempted to remove the monitor on the counter. Unable to do so, the suspect then picked up the rock from the counter and threw it through the shattered window again causing additional damage to the window and monitor. He then fled the area on foot in an unknown direction.

During the investigation, detectives became aware of a commercial burglary/vandalism spree related to the suspect that began on August 22, 2022 around 7:25 p.m. The suspect started his burglary spree at the above location which continued up until the vandalism that took place on August 30, 2022.

The suspect committed a total of (12) crimes around the area of Pico Boulevard corridor, between the 8700-11000 block of Pico Blvd ranging from (6) vandalism and (6) burglary where he has been identified and connected to.

On September 2, 2022 around 2:30 p.m., the suspect was identified as 56-year-old Douglas Irvin Kaufman, a homeless member of the Los Angeles area. He was arrested for 459 PC-Burglary. Kaufman is described as a male, white, 5’04, 120 pounds. His bail has been set at $285,000.00. Additionally, the suspect was booked on a supplemental probation warrant. 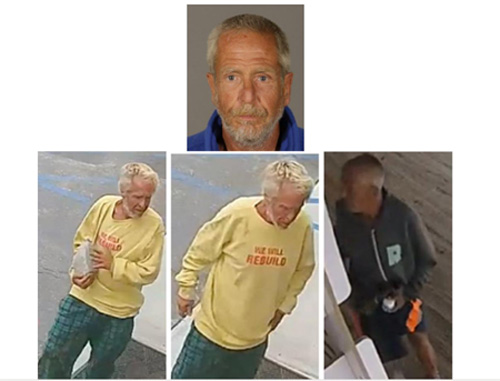 Detectives believe Kaufman is responsible for additional burglaries/vandalisms that have gone unreported. In an attempt to identify additional unidentified victims, detectives are releasing the suspect’s photo and request that members of the community/businesses come forward with additional video connected to Kaufman.

Tipsters may also visit www.lapdonline.org, and click on “Anonymous Web Tips” under the “Get Involved-Crime Stoppers” menu to submit an online tip. Lastly, tipsters may also download the “P3 Tips” mobile application and select the L.A. Regional Crime Stoppers as their local program.