Detectives from Central Bureau Homicide positively identified 43-year-old Anthony Madison for the murder of Sergio Santay. Central Bureau Homicide coordinated with the LAPD’s Gang and Narcotics Division/Marshall’s Task Force, to effect the arrest of Madison. On April 22, 2022. Madison was located and arrested in Boyle Heights for Santay’s murder.

At the time of the murder, Madison frequented the area of the Pico-Union District of Los Angeles. Madison is currently on probation for Assault with a Deadly Weapon with a firearm and narcotics sales. There are no other outstanding suspects in this case.

On April 8, 2022, around 2:40 p.m., Rampart Patrol Officers responded to a radio call of an, “Assault with a Deadly Weapon” on the 600 block of Bonnie Brae Street. Upon arrival, officers discovered the 34-year-old victim, Sergio Santay, suffering from a stab wound.

Los Angeles Fire Department responded to the area and transported the victim to a local hospital for treatment. Unfortunately, Santay failed to respond to medical aid and was pronounced dead at the hospital.

Detectives obtained surveillance video which captured the suspect and the stabbing. The victim was walking on Bonnie Brae Street when he was approached by the suspect, armed with a knife. Without provocation, the suspect stabbed the victim.

Surveillance footage revealed the suspect ran southbound on Bonnie Brae Street, eastbound in the east west alley, north of Wilshire Boulevard where he encountered two additional individuals sitting in the alley. The suspect approached both individuals and attempted to stab them before fleeing the location. The attacks appear to be random and unprovoked.

The suspect is described as a male, wearing a black fisherman hat with marijuana leaves, turquoise t-shirt, light colored shorts, and dark shoes. 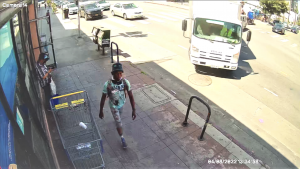 Anyone with additional information is urged to call the Los Angeles Police Department, Central Bureau Homicide, Detective Sharman or Detective Gonzales at (213) 996-4116. During non-business hours or on weekends, calls should be directed to 1-877-LAPD-24-7 (1-877-527-3247). Anyone wishing to remain anonymous should call the L.A. Regional Crime Stoppers at 1-800-222-TIPS (800-222-8477) or go directly to www.lacrimestoppers.org. Tipsters may also visit www.lapdonline.org, and click on “Anonymous Web Tips” under the “Get Involved-Crime Stoppers” menu to submit an online tip.