Sylmar: Mission Division’s Narcotic Enforcement Detail (NED) works diligently on a regular basis to facilitate and educate those in the lawful cannabis business. Assisting citizens and businesses in achieving their goals, unhindered by criminal activity, is among the best practices of the Los Angeles Police Department (LAPD). Individuals not willing to adhere to current laws and regulations put legal business owners at an unfair disadvantage and in many instances put the public in danger.

NED received citizen complaints of an unlawful cannabis manufacturing facility, in an industrial warehouse on Gladstone Avenue near Arroyo Street, in the Sylmar area of the City of Los Angeles. Due to the public concern, NED conducted an investigation of the suspected unlawful cannabis grow operation. A search warrant was obtained to enter the location, and conduct a further investigation.

On November 18, 2021, NED conducted search warrant service at the warehouse. The area is mostly industrial businesses including a large mail facility, a movie studio warehouse, a cookie manufacturing business, and a lawful cannabis retail facility. NED, led by Captain Michael Odle and Lieutenant Mark Garza, seized over 3,000 pounds of unlawful cannabis, two rifles, one shotgun, one pistol, and over $30,000 in U.S. currency. Eight individuals were arrested for unlawful cannabis manufacturing violations. 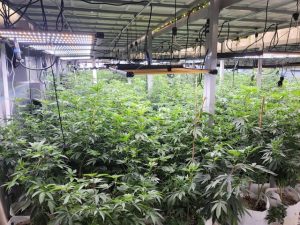 Due to the extreme fire danger and other safety concerns, NED was assisted by LAFD, Building & Safety, and L.A. Department of Water and Power (DWP).  Investigators discovered numerous code violations, including dangerous wiring, a gas leak, and hazardous fumes from a large diesel generator.  The conditions could have easily caused an explosion and fire at the location, putting lives and neighboring businesses at risk.  Due to the dangerous conditions all power and gas services were cut off to the involved building to protect the public.