This Crime Alert corresponds to the News Release below. 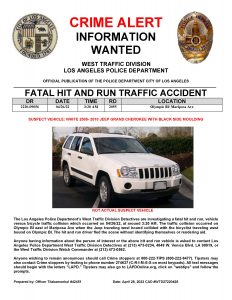 Los Angeles: Detectives from the Los Angeles Police Department’s West Traffic Division are asking for the public’s help in identifying the suspect responsible for a hit-and-run traffic collision that killed a bicyclist.

On Tuesday, April 26, 2022, around 3:20 a.m., a vehicle was parked on the north curb of Olympic Boulevard. As the vehicle pulled away from the curb and travelled west on Olympic Boulevard a victim of an unrelated “Grand Theft Auto,” jumped on the hood of the vehicle, believing the driver was related to the theft of his vehicle.

The vehicle continued west on Olympic Boulevard with the victim still on the hood. The victim then fell off the hood onto the street.

The Los Angeles Fire Department paramedics responded to the scene, provided immediate medical attention to both bicyclists. One bicyclist sustained minor injuries, the other bicyclist, unfortunately, succumbed to his injuries and was pronounced dead at scene.

The vehicle is described as a white colored Jeep Cherokee.

The victim’s identity is being withheld pending notification of next of kin.

Drivers are reminded that if they become involved in a collision, they should pull over and stop as soon as it is safe to do so, notify emergency services, and remain at the scene to identify themselves. The public is also reminded that as pedestrians, they should exercise caution when crossing streets, obey traffic lights, cross within marked crosswalks, and obey the rules of the road.

On April 15, 2015, the City Council amended the Los Angeles Administrative Code and created a Hit-and-Run Reward Program Trust Fund. A reward of up to $50,000 is available to community members that provide information leading to the offender’s identification, apprehension, and conviction or resolution through a civil compromise.

Anyone with information about this collision is asked to contact West Traffic Detectives at (213) 473-0234. During non-business hours or on weekends, calls should be directed to 1-877-LAPD-24-7 (877-527-3247). Anyone wishing to remain anonymous should call CrimeStoppers at 800-222-TIPS (800-222-8477). Tipsters may also contact CrimeStoppers by texting to phone number 274637 (C-R-I-M-E-S on most keypads) with a cell phone. All text messages should begin with the letters “LAPD.” Tipsters may also go to LAPDOnline.org, click on “webtips” and follow the prompts.