Los Angeles: On October 28, 2021, Pasadena Police Department assisted the Los Angeles Police Department in identifying 22-year-old Carlos Sanchez-Reyez, of Los Angeles, as the driver of the severe injury hit-and-run. The information was passed on through an internal wanted bulletin to all patrol officers.

On December 12, 2021, at around 4:50 p.m., a 2014 Ford Explorer was stolen from the 3300 block of Bagly Avenue, in West Los Angeles Division. When the registered owner realized their Explorer was stolen, the owner remembered that he left his cellular phone in the Explorer, which was equipped with a tracker, and began to track it. The cellular phone pinged in the area of Larga Avenue and Fletcher Drive, in Northeast Division. The owner called 9-1-1, and Northeast Patrol Units and an Air Unit were dispatched to the area.

The patrol units were now in pursuit of the Explorer. The pursuit traversed throughout the neighborhood where the driver drove in an unsafe speed, failed to stop for several “Stop” signs, and almost collided with a vehicle. The driver demonstrated a wanton disregard for public safety.

The pursuit terminated in the 2400 block of Dallas Street due to the street being a dead end. The driver surrendered to the officers without incident. Officers recognized the driver as Carlos Sanchez-Reyez from the internal wanted bulletin.

Sanchez-Reyez was arrested and booked for California Vehicle Code, 2800.2(a) Felony Evading, Booking No. 6292101, and was additionally booked on 2-Felony Probation Violation warrant, 1-Felony warrant for fraud from the Pasadena Court, Case No. PASGA107242. Sanchez-Reyez probation was also revoked, and his current bail is, “No Bail.” He is housed at the Los Angeles Police Department – Metropolitan Detention Center. He is scheduled to arraigned today at the Clara Foltz Criminal Justice Center, 210 West Temple Street, in Department 30.

On October 27, 2021, at approximately 1:10 p.m., a 30-year-old female was riding an electric scooter westbound on 4th Street, against the one-way road, just past Main Street. A 2020 Chevy Spark was travelling eastbound on 4th Street from Spring Street. The driver of Chevy collided head-on with the scooter rider, launching her into the air, and causing her to land head first onto the sidewalk.

The driver exited the vehicle and fled on foot without rendering aid or identifying himself to the victim. The suspect was last seen northbound Spring Street from 4th Street.

The Los Angeles Fire Department responded and transported the scooter rider to a local hospital. The scooter rider was admitted into the Intensive Care Unit with severe injuries; however, she is in stable condition and expected to survive.

The suspect is described as a male Hispanic, 20-25 years old, black hair, standing at 5 feet 6 inches to 5 feet 10 inches tall, and weighing at approximately 150 to 175 lbs. The suspect was last seen wearing gray pants with possible camouflage patterns and had a tattoo on the right side of his chest with unknown writing. 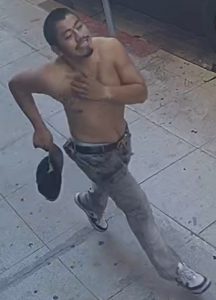 Drivers are reminded that if they become involved in a collision, they should pull over and stop as soon as it is safe to do so, notify emergency services, and remain at the scene to identify themselves.

The vehicle the suspect was driving was reported stolen out of Wilshire Division Area.

On April 15, 2015, the City Council amended the Los Angeles Administrative Code and created a Hit and Run Reward Program Trust Fund. A reward of up to $25,000 is available to community members who provide information leading to the offender’s identification, apprehension, and conviction or resolution through a civil compromise.

Anyone with information is asked to please contact Investigator Diaz, Central Traffic Detectives, at (213) 833-3713 or e-mail her at 36160@lapd.online. During non-business hours or on weekends, calls should be directed to 1-877-LAPD-24-7 (1-877-527-3247). Anyone wishing to remain anonymous should call the LA Regional Crime Stoppers at 1-800-222-TIPS (1-800-2228477) or go directly to www.lacrimestoppers.org. Tipsters may also visit www.lapdonline.org and click on “Anonymous Web Tips” under the Get Involved-Crime Stoppers” menu to submit an online tip.