Studio City: The Los Angeles Police Department’s Operations-West Bureau LAPD/ATF Gun Violence Reduction Task Force have arrested a suspect for Assault with a Deadly Weapon -ADW with a (Firearm) in addition to be a Parolee at large.

On December 29, 2022, the LAPD/ATF Gun Violence Reduction Task Force was investigating a suspect related to an Assault with a Deadly Weapon (ADW) investigation and Parolee at large. Ultimately, a search warrant of a residence was authored by the joint taskforce (ATF/LAPD) and granted by a Los Angeles Superior Court judge. 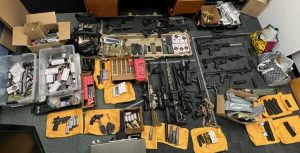 Investigators identified the suspects as:

Anyone with additional information can contact The Los Angeles Police Department’s Operations-West Bureau LAPD/ATF Gun Violence Reduction Task Force Detective II Smith at (213) 473-0408. During non-business hours or on weekends, calls should be directed to 1-877-LAPD-24-7 (1- 877-527-3247). Anyone wishing to remain anonymous should call the L.A. Regional Crime Stoppers at 1-800-222-TIPS (800-222-8477) or go directly to www.lacrimestoppers.org . Tipsters may also visit www.lapdonline.org and click on “Anonymous Web Tips” under the “Get Involved-Crime Stoppers” menu to submit an online tip. Lastly, tipsters may also download the “P3 Tips” mobile application and select the L.A. Regional Crime Stoppers as their local program.