The suspect in the below mentioned Officer-Involved Shooting (OIS) that occurred in Newton Division has been identified as 35-year-old Oscar Sanchez from Los Angeles.

The officers involved in the incident below have been identified as Police Officers II Diego Bracamontes, Serial No. 40514 and Christopher Guerrero, Serial No. 41997, Newton Patrol Division.

On January 3, 2023, around 5:25 p.m., LAPD Newton Patrol Division officers responded to a radio call of a male who threw an unknown metal object at a passing vehicle. When the driver pulled over and got out of the vehicle, he was confronted by the suspect, who threatened him with a knife.

When officers arrived at scene, the victim directed them to the rear of a nearby vacant/abandoned residence, where the suspect was last seen. The officers ultimately located the suspect standing on the second-story landing of the residence holding what appeared to be a metal pipe. The officers worked to de-escalate the situation with the suspect for several minutes and ordered him to walk down the staircase, however, he refused and stepped inside and closed the door. The officers ultimately formed an arrest team, ascended to the top of the landing, and pushed open the rear door. They were confronted moments later by the suspect, who stepped toward them while holding a two-foot-long metal object with an approximate three-inch spike protruding from one end. An Officer-Involved Shooting (OIS) occurred at that point along with a simultaneous deployment of a less-lethal munition. The suspect was struck by gunfire and transported by rescue ambulance to a local hospital, where he was pronounced deceased at 7:55 p.m.

The suspect has not been identified as of this news release.

The metal object held by the suspect at the time of the OIS was recovered at scene. At this point in the investigation, it appears to be the stem from a motorized scooter with a sharpened implement attached to one end. The suspect was also in possession of a utility-type knife that was also recovered at scene. 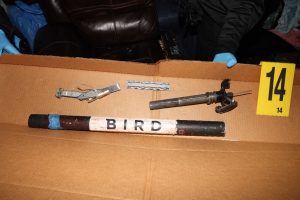 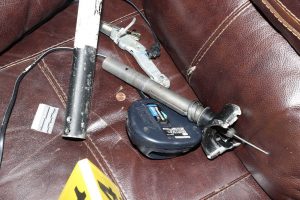 Photograph of objects recovered at scene

LAPD’s specialized Force Investigation Division responded to the scene and interviewed witnesses and supervised the collection of evidence by the Forensic Science Division. The complete investigation will be reviewed by the Chief of Police, the Board of Police Commissioners, and the Office of the Inspector General to determine the thoroughness and accuracy of the investigation and whether the use of deadly force complied with LAPD’s policies and procedures. Pursuant to Assembly Bill 1506, representatives from the California Department of Justice responded to evaluate the circumstances of this incident; however, they ultimately determined it did not meet their criteria.