The officer involved in the incident below has been identified as Newton Division Patrol, Police Officer I James Talavera, Serial No. 44856.

On November 14, 2022, around 9:20am, Newton Division patrol officers received a radio call of a “415 Woman with a Gun” at the strip mall located in the 2500 block of S. San Pedro Street. Upon arrival, the officers observed the suspect in front of the Burger King Restaurant in possession of a handgun.

The suspect was yelling at the officers as she waved the handgun in multiple directions, including pointing the handgun at the officers, members of the community, and placing it against her own head. The officers made several attempts to get verbal compliance from the suspect, but each attempt failed. The suspect then walked away from the officers in a westerly direction and at times ran from them, while still in possession of her handgun.

The officers followed the suspect in their vehicles, while communicating with each other and ordering the suspect to drop her handgun. An impromptu tactical plan was developed amongst the officers at scene, identifying lethal and less-lethal designations. The suspect continued moving westbound attempting to flee from the officers in a residential area. At one point the suspect pointed her handgun at the one of the officers, resulting in the deployment of one 40 MM Less-Lethal Launcher (LLL) round. The suspect was struck by the 40 MM LLL round. Almost simultaneously, another officer discharged his pistol at the suspect, resulting in an Officer-Involved Shooting.

The suspect was not struck by the officer’s gunfire. Immediately thereafter, a third officer discharged his 40 MM LLL at the suspect, striking her. The suspect, still in possession of the handgun, ran approximately a half a block from the officers before dropping the handgun in the street and running into a laundromat located on the 400 block of E. Adams Boulevard. The suspect was subsequently taken into custody in the laundromat by responding officers without further incident.

The suspect sustained two welts and bruising to her buttocks area. She was transported to the hospital, treated, released and cleared for booking.

The suspect was later identified as 42-year-old Antoinetta Giugliano, a resident of Los Angeles.

The investigation revealed the suspect’s firearm was a 6 MM Blue/Steel BB style handgun. There were no BBs in the chamber or magazine.  Pictures of the firearm attached below. 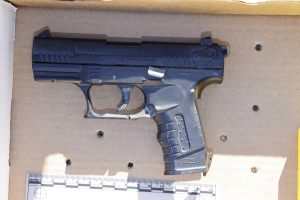 LAPD’s specialized Force Investigation Division responded to the scene and interviewed witnesses and supervised the collection of evidence by the Forensic Science Division.  The complete investigation will be reviewed by the Chief of Police, the Board of Police Commissioners, and the Office of the Inspector General to determine the thoroughness and accuracy of the investigation and whether the use of deadly force complied with LAPD’s policies and procedures.