On January 2, 2023 around 3:30 p.m., LAPD Rampart Patrol Division officers responded to a radio call of a “Violation of Restraining Order” at an apartment building in the 200 block of South Witmer Street. When officers arrived, they located the victim, who provided a valid restraining order and told officers the suspect was inside of an apartment unit. The officers requested additional units, a supervisor, and formulated a tactical plan. The officers conducted a follow up to the apartment to investigate the restraining order violation. The officers met the suspect at the front door to the apartment unit and began a dialogue, attempting to get him to exit into the hallway and surrender. The suspect refused to exit and became increasingly agitated, prompting officers to employ de-escalation tactics for an extended period. The suspect went to the kitchen and armed himself with a large knife and officers deployed two Tasers and pepper spray. The less lethal options initially caused the suspect to drop the knife on the floor; however, he immediately picked up the knife, raised it above his head, and an Officer-Involved Shooting (OIS) occurred. The suspect was struck by gunfire and pronounced deceased at scene.

The suspect was later identified as 45-year-old Takar Smith, a resident of Los Angeles.

A large knife (approximately10-inch butcher style) was recovered at the scene and booked as evidence. 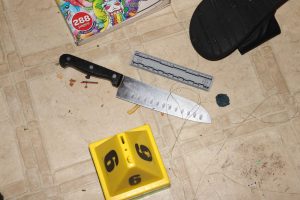 Photograph of knife recovered at scene

LAPD’s specialized Force Investigation Division responded to the scene and interviewed witnesses and supervised the collection of evidence by the Forensic Science Division. The complete investigation will be reviewed by the Chief of Police, the Board of Police Commissioners, and the Office of the Inspector General to determine the thoroughness and accuracy of the investigation and whether the use of deadly force complied with LAPD’s policies and procedures.