The officers involved in the below incident have been identified as Southwest Division Sergeant I Brett Hayhoe, Serial No. 35586 and Police Officer II Daryl Glover, Serial No. 42064. The suspect remains hospitalized and is listed in stable condition.

The following is a transcription of the radio call received by LAPD Communications Division from the person reporting (PR) the incident:

PR: I got a guy, dark skinned guy with dreadlocks and what looks like a flannel shirt on.
Communications Dispatch (CD): I’m sorry….
PR: He’s black with dreadlocks, looks like he’s a transient. And, uh I told him to leave and he pulled out a gun. Looks like a black, semi-automatic gun.
CD: Is he still there?
PR: He’s in front of the trash cans. I told him to leave and then he asked me…you leave! I will leave when I want! You can leave and then all of a sudden, I saw a pistol in his hand.
CD: Is he still there?
PR: Uh, he might be out there still. It was less than two minutes ago.
CD: Do you remember what color shirt and pants he had on?
PR: He has on black pants and maybe possibly a green, um, flannel shirt or something, some kind of long sleeve shirt.

The following are still photographs of footage captured by the officers BWV during the incident. 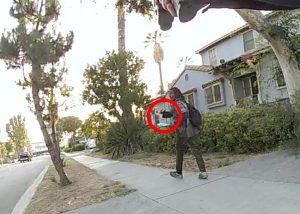 The suspect walking with an object resembling a firearm in his right-hand. 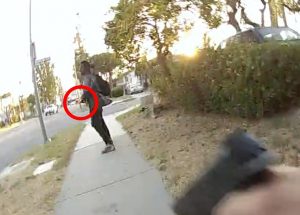 The suspect turning in a southerly direction towards an approaching police vehicle, holding what the Sergeant and Officer believed to be a firearm in his right-hand. 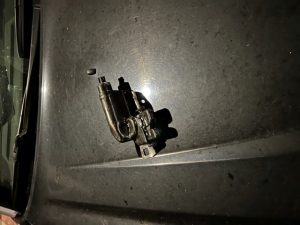 A photograph of the black metal actuator held by the suspect at the time of the incident.

On July 18, 2022, at around 7:20 p.m., Southwest Division patrol officers received an “Assault with a Deadly Weapon” radio call. The reporting party advised Communications Division that the suspect was armed with a black, semi-automatic handgun. Uniformed personnel observed the suspect matching the description listed in the comments of the radio call, walking on the north sidewalk of Martin Luther King Boulevard, just east of Bronson Avenue. Officers made contact with the suspect, who they believed was in possession of a handgun. The suspect refused to respond to officer’s verbal commands. As a uniformed supervisor arrived at scene, he also believed that the suspect was armed with a handgun. As the suspect walked away from the officers, he turned multiple times in their direction and pointed a black metallic object believed to be a firearm, which resulted in an Officer-Involved-Shooting (OIS). The suspect was struck by gunfire and taken into custody.

Los Angeles Fire Department (LAFD) paramedics responded to the scene and transported the suspect to a local hospital where he was listed in serious condition.

The suspect was later identified as 39-year-old Jermaine Petite, a resident of Los Angeles.

A six-inch, black metal latch actuator was recovered at scene.

LAPD’s specialized Force Investigation Division responded to the scene and interviewed witnesses and supervised the collection of evidence by the Forensic Science Division. The complete investigation will be reviewed by the Chief of Police, the Board of Police Commissioners, and the Office of the Inspector General to determine the thoroughness and accuracy of the investigation and whether the use of deadly force complied with LAPD’s policies and procedures. Additionally, the Los Angeles County District Attorney’s Office who responded to the scene will review the subsequent FID investigation, evidence collected, and witness statements to determine if the force used by the officer was reasonable.