On September 29, 2022, around 1p.m., Suspect Freddie Lee Trone was apprehended in Las Vegas, NV. He was taken into custody by the Las Vegas Criminal Apprehension Team Task Force.

He will be booked in Las Vegas on his warrant pending extradition to Los Angeles, California.

The case against those arrested will be presented to the Los Angeles District Attorney’s Office for filing consideration no later than Thursday, September 29, 2022.

On Monday, September 12, 2022, Rakim Allen, aka “PNB Rock,” arrived at a restaurant located at the 100 block of West Manchester Avenue with his girlfriend. As they were having lunch, a suspect entered the restaurant and approached Allen. The suspect shot Allen and removed some of his property. The suspect also demanded property from Allen’s girlfriend. The suspect fled the location in an awaiting vehicle. 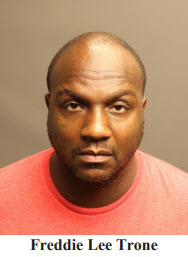 Freddie Lee Trone has been identified as being a person involved in the murder of Rakim Allen.  He should be considered armed and dangerous. If you see him, you are urged to call 911 for immediate assistance.

Anyone having information on the whereabouts of the suspect or anyone having additional information about this homicide is urged to contact South Bureau Homicide Divisions Detectives Nellie Knight or Matthew Clark at 323-786-5146. Anyone wishing to remain anonymous should call the LA Regional Crime Stoppers at 1-800-222-TIPS (800-222-8477) or go directly to www.lacrimestoppers.org.