During these Organized Retail Theft Incidents, multiple suspects took large amounts of clothing with an estimated value of $23,000.00. LAPD’s Communications Division was notified, and officers responded.

A total of 18 Suspects were arrested ranging in ages between 15 years of age and 20 years of age. They were arrested for violation of California Penal code §490.4 PC (Organized Retail Theft) and 487 PC (Grand Theft), a felony. The suspects live throughout the City of Los Angeles and Los Angeles County.

A total of 8 vehicles were impounded. All the stolen items have been recovered and returned to the shoe and clothing retailers.

Those same suspects are suspected to be involved in 14 other incidents throughout the City of Los Angeles and Los Angeles County, with an estimated total loss of $90,000.00 worth of items that were stolen. 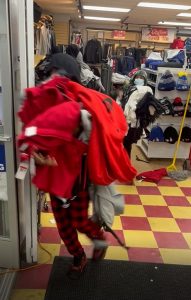 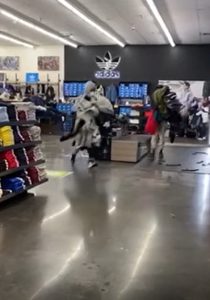 The investigation into these incidents is ongoing and will be a combined investigative effort of LAPD, LASD, and the clothing retailer’s Loss Prevention personnel.

Anyone with information related to this or any other Organized Retail Theft Incidents is urged to contact their local or nearest Law Enforcement agency. If in the city of Los Angeles, during non-business hours, or on weekends, calls should be directed to 1-877-LAPD-24-7 (877-527-3247). Anyone wishing to remain anonymous should call the LA Regional Crime Stoppers at 1-800-222-TIPS (800-222-8477) or go directly to www.lacrimestoppers.org. Tipsters may also visit www.lapdonline.org, and click on “Anonymous Web Tips” under the “Get Involved-Crime Stoppers” menu to submit an online tip. Lastly, tipsters may also download the “P3 Tips” mobile application and select the LA Regional Crime Stoppers as their local program.