On October 9, 2022 at about 7:15 p.m., the victim went to Echo Park Lake to walk her dog. At approximately 8:00 p.m., she returned to her apartment complex after completing one lap around the lake. When she arrived at the front door to her apartment she observed an unknown male approach her and make a comment about her dog.

The victim opened her door, helped her dog inside the apartment and attempted to close her door. Before victim could close her door the suspect pushed her door open with his hand and entered into victims’ apartment without her permission.

The suspect pushed victim to the ground and got on top of her and simultaneously groped her genital area. The victim screamed for help and the suspect slapped the victim twice in the face and covered her mouth to prevent her from screaming. The suspect then groped victim’s genital area again, until the victim was able to separate herself from the suspect by kicking him off her.

The victim attempted to stand up then fell to the ground, she crawled to the door while screaming for help. The suspect pulled the door open and walked out of the apartment and complex towards Glendale Boulevard and Montana Street. 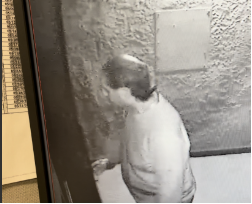 Detectives are requesting that anyone with information that could lead to the identification of the suspect, additional victims and witnesses to contact Rampart Detectives, Sexual Assault Section, at 213-484-3625. During non-business hours or on weekends, calls should be directed to 1-877-LAPD-24-7 (877-527-3247). Anyone wishing to remain anonymous should call the LA Regional Crime Stoppers at 1-800-222-TIPS (800-222-8477) or go directly to www.lacrimestoppers.org. Tipsters may also visit www.lapdonline.org and click on “Anonymous Web Tips” under the “Get Involved-Crime Stoppers” menu to submit an online tip. Lastly, tipsters may also download the “P-3 Tips” mobile application and select the LA Regional Crime Stoppers as their local program.