As the officers proceeded southbound onto Hillcrest Drive from Martin Luther King Jr. Boulevard they observed a dark Nissan sedan travelling northbound in the southbound lanes of traffic.

The Nissan accelerated towards the police car while driving on the wrong side of the road. The driver officer maneuvered the police car to avoid a head-on collision. The suspect changed his vehicle’s direction and collided with the passenger side of the police vehicle. 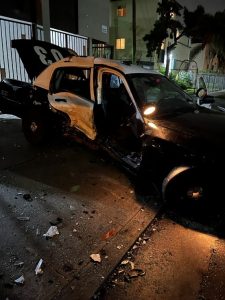 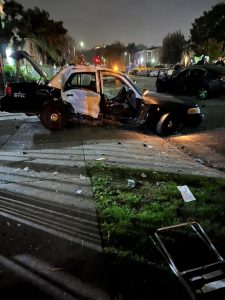 The officers were transported to a local hospital. One officer was treated and released and the other was admitted for further treatment.

Jose Nicholas Lopez 21-year-old from Los Angeles was arrested for one count of California Penal Code 245(c) PC, Assault with a Deadly Weapon on a Police Officer, with a $50,000 bail.

The case will be presented to the Los Angeles District Attorney’s office for filing consideration.

Anyone with information related to this incident is urged to call LAPD Robbery Homicide Division (213) 486-6890. During non-business hours, or on weekends, calls should be directed to 1-877-LAPD-24-7 (877-527-3247). Anyone wishing to remain anonymous should call the LA Regional Crime Stoppers at 1-800-222-TIPS (800-222-8477) or go directly to www.lacrimestoppers.org . Tipsters may also visit www.lapdonline.org , and click on “Anonymous Web Tips” under the “Get Involved-Crime Stoppers” menu to submit an online tip. Lastly, tipsters may also download the “P3 Tips” mobile application and select the LA Regional Crime Stoppers as their local program.