Melrose District: The Los Angeles Police Department’s Robbery-Homicide Division (RHD) Follow Home Task Force identified and arrested one of the suspects responsible for shooting at a victim in front of a local business during an Attempt Robbery. Detectives are seeking the public’s assistance in identifying the other suspect as well as locating any additional victims.

On April 10, 2022, around 6:00 p.m., the victim was standing in front of a clothing store on Melrose Avenue in the Melrose District of Los Angeles. The victim observed two men coming from the nearby alley. The victim was wearing an expensive watch and felt like the men were looking at him. The victim ran inside the business towards the backroom of the store. The suspects followed the victim and fired six rounds in the victim’s direction. The victim was not struck by the gunfire.

Robbery-Homicide Detectives located additional video adjacent to the alley where the suspects were seen coming from. The surveillance cameras captured the suspects arriving in a vehicle. The video showed that the two suspects were driven away by a third suspect.

On April 18, 2022, at 4:00 p.m., Los Angeles Police Officers located and arrested Jamario Kevin Ray, a 22-year-old resident of Los Angeles and a search warrant was conducted at his residence.

Suspect#2 is described as a male Black in his twenties, stands 6 feet tall and weighs between 170-190 pounds. He was last seen wearing a navy hooded sweatshirt, gray pants and black shoes. 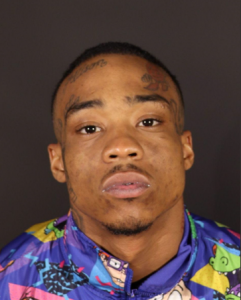 Anyone with information about this incident, additional incidents involving these suspects, or for more information, is asked to call the Follow Home Robbery Task Force at Robbery-Homicide. Anyone with information or video regarding these incidents is urged to contact Detective Alonzo and Detective Mrakich at (213) 486-6840. During non-business hours or on weekends, calls should be directed to 1-877-LAPD-24-7 (1-877-527-3247). Anyone wishing to remain anonymous should call Crime Stoppers at 1-800-222-TIPS (800-222-8477) or send an email to RHDtipline@lapd.online.